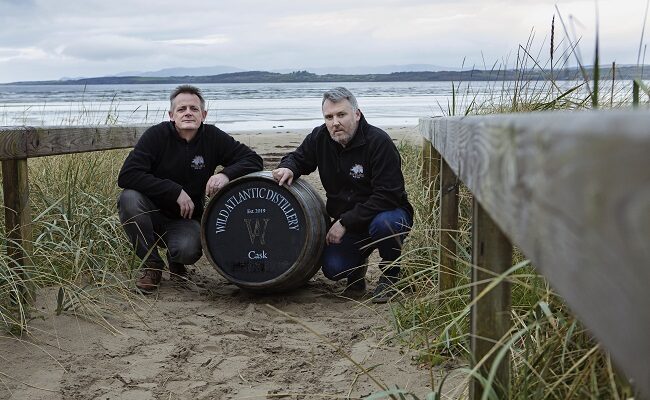 Brothers in law Brian and Jim Nash are passionate about maintaining the long history of independent, traditional and craft distilleries in Ireland and particularly County Tyrone where they are based.

In 2019 a team from whiskeyonline.com discovered a cache dating back to the mid-1800s. It’s not far from where the distillery was built. 2021 marks the 100th anniversary of the Watt lockout in Derry, which effectively ended a golden era of whiskey production in the region. One hundred years on, and Wild Atlantic Distillery is reviving the traditional whiskey production of this region.

The wild, rugged and beautiful land around the Wild Atlantic Distillery nurtures the perfect conditions for creating & ageing their traditionally crafted Irish whiskey.

The Atlantic Ocean provides the botanicals for their unique gin. It is inspired by the Porcupine Bank- a natural wonder 120 miles off the west coast.

Their vodka is infused with Amalfi lemons and inspired by the warrior Queen Maeve of Connaught. She was known as She Who Intoxicates.

Why not try your hand at making your own gin with a Gin Class, go on a Distillery Tour or learn some new cocktails in our cocktail class with these small-batch spirits?