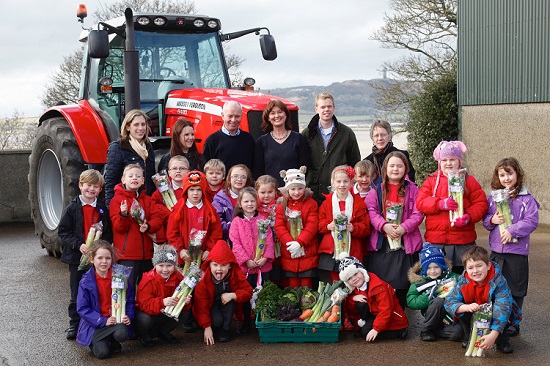 Around the shores of Strangford Lough on the Ards Peninsula, the air is a little warmer. That creates good conditions for growing vegetables, which is what the Lyttle family has been doing for over thirty-five years. Son, Alexander, has recently joined the business and extended the range of crops grown.

The primary crop in the summer is Spring Onions (Scallions) and for ten months of the year, is Leeks. These are grown, harvested, prepared and packed and finally delivered to client specification. Parsley and Herb Celery, (or Soup Celery) are also grown for processors who produce washed and chopped soup vegetables and ready-made soups supplied to the major multiples across the UK. They have recently extended this range to include Beetroot and coleslaw Cabbage.

They also grow a range of organic vegetables, including Cabbages and Leeks, as well as Purple Sprouting Broccoli. Since 2017 they have been growing Organic Potatoes for independent retailers and box schemes. They are working to extend the season of availability of supply in order to reduce imports because consumers are becoming increasingly supportive of local producers.

Roy and his wife and business partner Sheila host school and community visits to educate people about where their food comes from and how other professions benefit from local producers. A purpose built viewing gallery permits visiting groups and interested parties to view the whole vegetable production process.