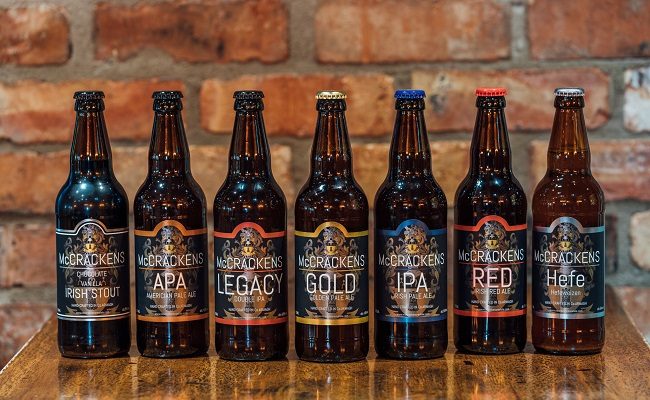 McCracken’s Real Ale is a small family run microbrewery based in Portadown, County Armagh. Ryan’s love for brewing started out like many brewers, a gift from his wife of a beer making kit. What started out as a hobby quickly turned into a passion and then a dream to open his very own brewery.  Ryan learned all he could about micro-brewing before making the leap and setting up his own business.  He was also following on in a tradition started out by two McCracken brothers over 100 hundred years ago – Peter and Robert who started what is now one of the biggest-selling breweries in Australia.

He and his team craft, bottle and package all the ales by hand.  They use only four ingredients (water, barley, yeast and hops) and brew only in small batches resulting in quality, full-bodied ales. Their ales are all unfiltered and bottle conditioned which ensures the natural goodness and full flavours are all kept intact.  They do not use any artificial preservatives or any other chemicals in their products.

They believe in using natural fresh ingredients and source many of the ingredients locally to maintain the highest quality standards and to ensure they contribute back to the local economy.

The range started with only two ales and has now grown over the last year to a selection of four.

McCracken’s Golden Pale Ale (GOLD) Using a specially selected blend of Irish malts with just a hint of caramel malt giving it added flavour. Including a mix of Citra, Cascade and Chinook hops make this Golden Pale Ale both refreshing and flavoursome. Perfect for a hot summer’s day, a few pints out in your local or even to accompany a steak. This beer is a good all-rounder that should cater for most tastes. McCracken’s Irish Pale Ale (IPA) Taking influences from America‘s West Coast IPA and the classic India Pale Ale and combining those with local Irish ingredients, know how and some Irish charm thrown into the mix. McCracken's Irish Pale Ale combines Citra and Chinook hops gives this Ale hoppy character with zesty bite. McCracken’s Irish Red Ale (RED) To get its character red hue and caramel undertones, a special blend of malt is used along with just the right amount of Willamette and Northern Brewer hops to create an ale that is both easy to drink and refreshing. McCracken’s Legacy (Double IPA) Double IPA that is bursting full of Citra and Chinook hops. Combining this with a carefully balanced mix of malt makes this ale hoppy, zesty and full of flavour.