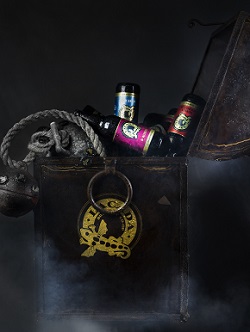 Lacada Brewery Co-Operative is a multi-award winning brewery that brews amazing beers in small batches in Portrush. With beguiling names linked to the north coast and a wide range of beer styles, this small brewery has firmly established itself as a favourite with visitors and locals alike. In 2017, their Devil’s Washtub dark ale was judged to be Best New Product in Ireland at Blas na hEireann. With hints of chocolate and toffee alongside marmalade orange, this very special beer captured the imagination.

Another hit is their flagship IPA, East the Beast. Named after a famed surfer’s wave off Portrush this beer is cool and refreshing with tropical notes of pineapple fizzing on your palette. In 2018 another major award landed for Utopian Stout as it garnered 3 gold stars at the Great Taste Awards. It’s a super beer with a silkiness and smoothness that marries perfectly with its dark coffee and caramel malt characters. Their most popular beer is West Bay citra pale ale, refreshing and more-ish all year round.

Lacada host their own Annual Festival – the Portrush Beer Festival – each October. It has quickly established a reputation as one of the best of its kind in Ireland. It regularly features top breweries from Ireland, Scotland and further afield. Every so often the brewery runs their own taprooms serving up single batch brews as well as firm favourites – keep an eye out for dates! Brewery tours can be booked in advance, with a minimum of ten people required.