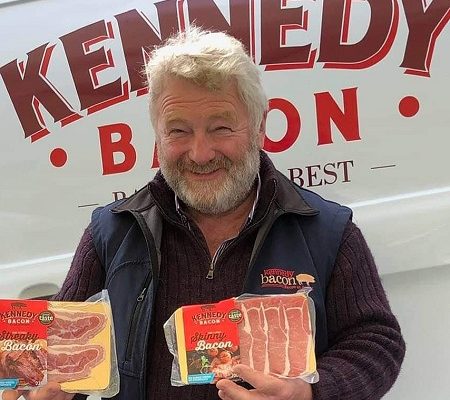 The Kennedy family have been farming Glenhordial since the 1940s. The farm is in an area of natural beauty in the hills above Omagh on the edge of the Sperrins. Mervyn Kennedy has been involved from a young age rearing and fattening pigs. He was always interested in curing bacon as the end product of his toil with the pigs.

He attended various courses and after much experimentation he produced a tasty, traditional cure. No water is added and the bacon tastes as it should; savoury, yummy and moreish. It really is bacon at its best

Kennedy Bacon have been receiving yearly awards from the Guild of Fine Food since 2015. They have a selection of 1 and 2 Star Great Taste Awards as well as being Finalists in Blas na hEireann three years in a row. SALSA Accredited since 2016. Great Taste Award 2020- 1* for dry cured streaky bacon

Shops, restaurants, hotels and bed and breakfasts all over Northern Ireland. Shows, festivals and farmers markets DELIVERY RADIUS Kennedy Bacon is looking for distributors in NI and the Republic as well as cafes, hotels and restaurants who would like to serve their delicious bacon.