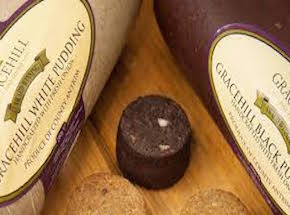 Gracehill Fine Foods was established in 2011 by Hugh Anderson with the goal of producing the best black and white puddings regionally. He does the pudding thing the time-honoured way with no pre-mix. Hugh prides himself on using fresh ingredients from local suppliers, where possible. Hugh only uses fresh onions. He believes that the extra work involved and expense is worth the effort to ensure a pudding with a superb fresh flavour.

Sales are increasing year on year. This is the real deal, so when you see it, get it!

Food service from Carnbrooke Meats, Get Fresh and Hannan Meats Gracehill puddings are also available in high quality butchers across NI and food outlets in the mid Antrim area.