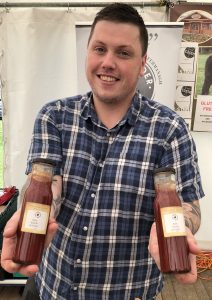 A dry cured smoked bacon ketchup has been launched by Erne Larder Preserves, an artisan business and Food NI member based in Enniskillen.

The unique sauce, the first in Ireland, uses a unique recipe created by experienced chef Declan O’Donoghue, who founded the artisan food business in his Enniskillen home, last year.

The smoked bacon ketchup is the latest addition to his developing portfolio of jams, relishes and pesto that he has created on the back of his experience as a chef over 20 years in hotels and restaurants in both Northern Ireland and the Republic of Ireland.

The ketchup features Fermanagh Black Bacon, an award-winning cured meat developed by Pat O’Doherty of O’Doherty’s Fine Meats in Enniskillen, who runs a leading butchery/deli business in Enniskillen, among its ingredients.

“Fermanagh Black Bacon has a wonderfully rich and tasty flavour that make it ideal as an ingredient for a wide range of applications such as jams and sauces. I decided to develop the ketchup in collaboration with Pat O’Doherty and in response to customers seeking a premium ketchup with a touch of spice.

“I really enjoy coming up with innovative food with different blends of flavours,” he adds. It’s a ketchup with a bit of a kick,” he says.

Erne Larder products are now on sale in delis and independent stores across Northern Ireland, and Mr O’Donoghue has plans to extend the range and also to move into other food areas including patisserie.

He recently gained a listing with Lidl Ireland for his bacon jam and has begun supplying almost 200 of the discounter’s stories throughout the island of Ireland.

A key element in his approach is a focus on locally–sourced ingredients. “There are so many excellent products available across Northern Ireland that can be used to create innovative and tasty products.”