Northern Ireland’s first ever Slow Food Festival organised by Derry City and Strabane District Council (DCSDC) has been hailed as a huge success after upwards of 25,000 visitors flocked to the two-day culinary celebration in Guildhall Square at the weekend.

The sun also shone on the Festival, which celebrated “good, clean and fair food” from across the North West during October’s Harvest theme for Northern Ireland Year of Food and Drink 2016, and was supported by the Department of Agriculture, Environment and Rural Affairs (DAERA) NI Regional Food Programme, assisted by Slow Food NI.

Jennifer O’Donnell, Rural Tourism Project Officer with DCSDC and main organiser, said they were absolutely delighted that visitor numbers had exceeded all expectations for the event which took place on Saturday and Sunday from 12 noon until 6pm and also attracted international attention from Slow Food followers around the world on social media.
“Upwards of 25,000 people attended our Slow Food Festival over the two days. We were totally blown away by the crowds who flocked to the event on both Saturday and Sunday and the response has been overwhelming across the board. A number of the producers sold out on the first day and some had even sold out both days’ produce, such was the demand from the public which speaks volumes for the quality and range of our local food provenance.”

The Slow Food Festival, which also showcased an impressive clear-roofed and sided marquee for the first time with unique views of the Guildhall, featured a Harvest-style market with award-winning produce ranging from charcuterie to fish, jams, chutneys and preserves, cheese, beef and pork as well as cookery demos, talks by local craft brewers and display by local beekeepers.

Paula McIntyre, Director of Slow Food NI, hailed the first ever Slow Food festival in NI as “a great success”. She continued: “It was wonderful to see children potting pea shoots at Jilly Dougan’s stand and getting an understanding of where food comes from. From a chef perspective it was a joy to cook with such great Slow produce in the demos – rare breed chorizo, Dexter beef, proper bacon, chutneys, jams, cheese and real salt.
“The Playtrail’s aquaponic stand was a stunning 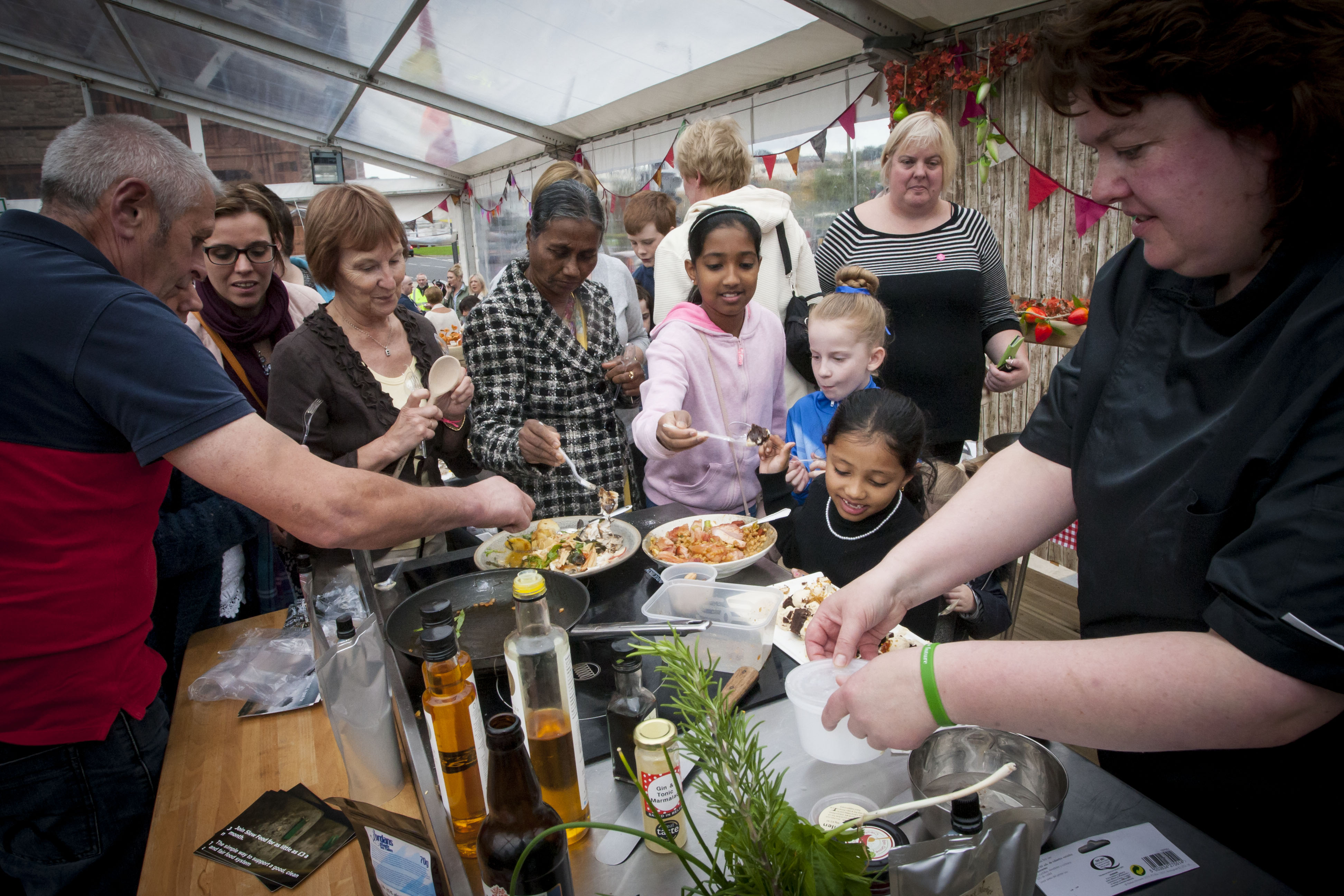 showcase for their project. It’s always encouraging to see people flock to the Donegal Prime stand selling sustainable fish and young and old alike trying the awesome Foyle Flatbed Oysters at the Loughs Agency stand. The highlight for me was an awareness of Slow Food in the crowds – our message of ‘good, clean and fair’ food really got through over the weekend.
“A personal highlight was seeing a group of people from Connecticut, who I met while giving a talk at the Dingle food festival last weekend, make the detour on their trip to take in the Slow Food Festival. And, sharing the stage with my friend and Chef Brian McDermott is always great craic!”

Chef Brian McDermott, who showcased a new Slow Food soup featuring Corndale Chorizo from Limavady, said he was also delighted with the response from the crowds during what he said had been an “energetic” festival for all involved. “There is a feel for the producers that they are not commercial giants; they are real people with real food and real stories. People were arriving inquisitive to learn and leaving educated about Slow Food”, he added.
Food Festival newcomer Alastair Crown of Corndale Charcuterie, said there had been an “overwhelming response” to their new free range chorizo. “We sold two days’ stock in one day! We had Spaniards, Italians and people from Co Down and Co Donegal. This was our first time doing a proper festival and it was very well organised.”
Cathy and Michael Quigley of C&M’s Pantry, who are also one of the regular traders at the Walled City Market and produce handmade jams, preserves and baked goods from their home in Derry, said the crowds were “just amazing” and that it had been the busiest event for them to date.

Jayne Paget of Erin Grove Preserves in Enniskillen, winners of ten Great Taste Awards who previously exhibited at the LegenDerry Food Festival and Clipper Race Kitchens, was also full of praise for the Slow Food event. “This has been brilliant. People are really receptive to trying new things and are all into farm-produced food. Our best sellers were Lemon Curd and our new Sour Cherry with Cracked Black Pepper”.
Patsy Farren of Donegal Prime Fish, also said the event had been “absolutely brilliant”, with mackerel, John Dory and salmon among their top sellers during the two-day event.

Mark Roberts from Pennyburn Playtrail said there had been a great response to their new FabFarm project, with visitors from as far away as Cork. Families had also enjoyed taking part in their wooden maze competition to win a free aquarium.

Paul VanGelder of Red Dog Artisan Foods in Kilkeel, Co. Down, who were showcasing their products in Derry for the first time, described it as a “top class event”. He added: “Normally we don’t do first time events but if all first time events were like this one we would do them every time we were called.”

Carol Banahan of Carol’s Stock Market based in Derry and Donegal and a new business client at the state-of-the-art Food Innovation Centre which recently opened at North West Regional College, also sold out of her handmade fresh stocks on the opening day of the Festival.
“The response was absolutely brilliant. A lot of people have a real appreciation for traditional Slow Food. I sold out on Saturday and had to stay up really late to make more stock. It has been really great to get my name out there.”