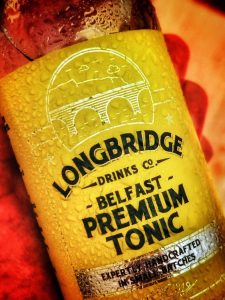 The craft producers of classic soft drinks recently launched a Belfast Ginger Ale, a beverage first produced in the city in 1825. The mixer was recently listed by Adare Manor and Golf Resort in Co Kerry, its first significant sales in the Republic

Wayne Adair, director of Longbridge Drinks, says the new artisan tonic mixer is “crisp, cool and carbonated” and is ideal for a range of quality spirits.

Longbridge drinks are founded on a longstanding tradition in craft minerals such as non-alcoholic ginger wine and clove cordial.

“The tonic is being made in small batches and is an artisan product with a refreshing blend of botanicals, with citrus notes. It’s low in sugar, while natural quinine from the Congo delivers that fresh, zingy flavour,” he adds.

The company, he says, decided to develop the new tonic water following the success of its Belfast Ginger Ale with bars, the off-trade and retail outlets. “They liked the ginger ale so much that they encouraged us to develop a tonic water mixer too.

“Our focus group tastings have produced very encouraging feedback in terms of the taste of the tonic on its own and as a mixer with spirits such as gin and whisky,” he adds.

The new artisan tonic from Northern Ireland will be available in 220ml bottles as also is the ginger ale.

Longbridge, named after the bridge that spanned the city’s River Lagan in the 19th century, is a new trading style developed by Papas Minerals, a successful craft producer of small batch soft drinks including award winning cordials.

Papas Minerals, based in Bangor, county Down, is an artisan producer of craft minerals and cordials such as non-alcoholic ginger wine, traditional clove cordial and elderflower cordial.