Armagh Apple Butter has been developed by a leading chef in a popular Olde World bar in Northern Ireland.

Mr Steenson, head chef at the bar for 12 years, commenting on the new butter spread, says: “The idea came from Peter Lyness, the bar’s owner, on his return from a US trip. Peter saw and enjoyed apple butter there and suggested that we should use Armagh’s reputation in growing apples and producing cider to create our own version.”

“I did some basic desk research and discovered that there are also apple butters in other parts of the world including Germany and the Netherlands. It made sense to me to develop a distinctive Armagh apple product.”

“I then approached Helen Troughton at Armagh Cider Company for advice and help in developing a recipe for the butter. I used traditional Armagh Bramley apples in the development of a distinctive recipe that isn’t overly sweet and with just the right amount of acidity. I then tested it on friends and family. Feedback was extremely positive and encouraged me to start making the butter they had enjoyed in small batches,” he adds.

He named the new Armagh Apple Butter after Groucho’s in Richhill and is producing it in small batches in 225g jars at £4. In addition to Armagh Bramley apples, which have EU protected accreditation, the butter includes cider vinegar, sourced from Apple Cider Company along with the apples, spices, sugar and water.

The butter is currently being sold in the bar and has already attracted the attention of tourists in particular. In addition, Armagh Cider Company is selling the original product.

“The apple butter is currently being produced by me in the bar’s kitchen and so it’s essentially a small batch product. As well as customers in the bar, I see the butter as an ideal souvenir and gift product for tourists especially those on the many food tours now visiting producers and bars in the Armagh area.”

“It’s also helping to showcase Groucho’s as well as Armagh Bramley apples. It reflects Groucho’s longstanding commitment to sourcing local food and drink for all our menus. We’ve some marvellous food and drink now being produced in Northern Ireland, products we prefer to use in our dishes and in the bar,” he adds. 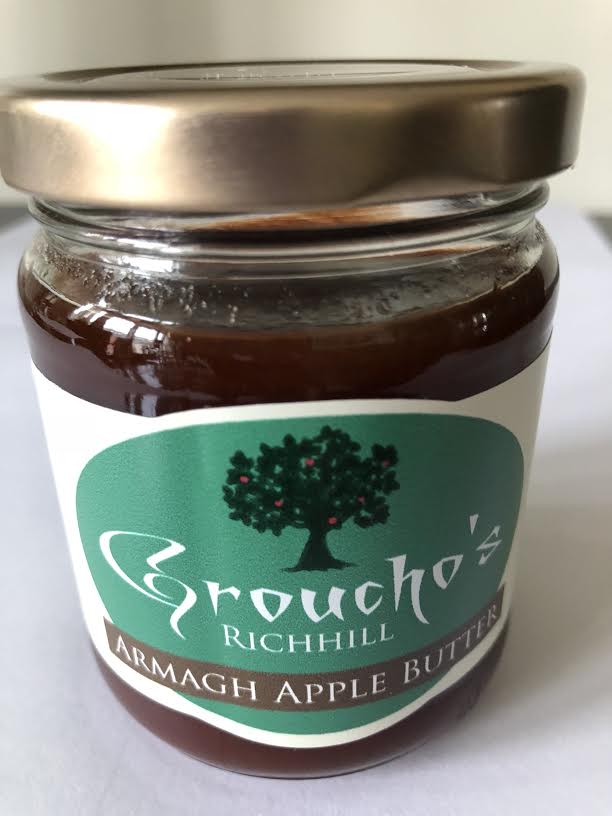