Ulster Bank has recently produced a new and important briefing on how the various Brexit outcomes could impact on individual businesses here. The bank has agreed that we should assist Food NI member companies by putting it on our website for information.

It is based on an assessment by NatWest, Ulster Bank’s parent company, on the probabilities of various Brexit outcomes in the near-term. It comes from discussions with customers.

These revolve around Deal, no deal or extension and relate to the various Brexit timelines (e.g. the 31st October 2019 EU exit deadline).

Extension = somewhere in between. 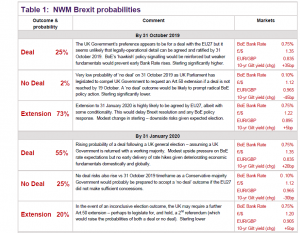 Where are we now?

With the UK Parliament passing legislation requiring the UK Government to seek an extension to Article 50 in the absence of a Deal, a No deal scenario by 31 October looks very unlikely (2%). Equally, the prospect of a deal looks increasingly unlikely. Following the Brexit plan revealed in the last 24 hours, the odds of a deal between the UK and the EU look even slimmer.  That leaves Extension (to 31 January 2020) as the most likely outcome in October with a General Election being slotted in before then (late-Nov / Early Dec 2019).

Stand back from the noise…nothing to see here

Boris Johnson’s “two borders for four years” Brexit plan was recently unveiled. It has been met with considerable criticism. This has nothing to do with business / economic interests and everything to do with politics.

Needless to say what details have been revealed, the outlook suggests that the proposed plan is unlikely to be agreed to by the EU. The latter are not going to compromise ahead of a General Election. Similarly, Boris Johnson’s interests are best served by being seen to present a deal that the EU has spurned.