Northern Ireland’s largest independent coffee bar chain, Ground Espresso Bars, is more than disproving the unlucky 13 superstition with the official opening of their two newly refurbished outlets in Belfast City, and the announcement that they will be opening numerous sites as part of a multi-million pound investment with Next plc, including two stores in Northern Ireland and their first unit in Dublin.

Investing more than £100,000 in their two Belfast stores is just one of the ways that owners of the leading independent coffee bar chain Karen and Darren Gardiner have celebrated reaching this impressive milestone in business. The investment has seen extensive refurbishment works completed in the concessions in Waterstones, Fountain Street, and Next, Donegall Place, which will enable the company to better serve the needs of customers and solidifies Ground Espresso Bars’ successful partnership with two of the high street’s most recognised brands.

“This investment in our Belfast stores marks the next chapter in the Ground story. Our concessions in Belfast are bigger and better, meeting the needs of families as well as the growing number of people who use our coffee shops as a place to conduct meetings, work and gather socially,” said Karen Gardiner.

Employing over 120 staff across 11 stand-alone stores and concessions in Northern Ireland, the Ground brand has gained a reputation for quality coffee and a focus on locally-sourced produce which owner Karen Gardiner believes is one of the main reasons for their success to date.

“This is a significant investment for a local company and we look forward to further investment and job creation in the coming months, with a multimillion pound expansion plan with Next plc, where we have already confirmed two new sites in Newry and Newtownabbey and finalising a further 6 locations across Northern Ireland and the Republic of Ireland, creating in excess of 100 new jobs in the next 12 months.”

“Plans are underway for the expansion into new stores and concessions and we are delighted to be partnering with Next plc to open our first store in the Republic of Ireland, where works have already commenced in the first unit in Blanchardstown and an official opening in the coming weeks.”

Ground Espresso Bars made a commitment when they opened their first store to provide the Northern Ireland public with fresh homemade produce as well as high-quality coffee, and this has paid off, not only with loyal customers but also with Next and Waterstones who selected a small local firm rather than one of the multinational chains to reside in their flagship stores in Northern Ireland.

The refurbished stores in Waterstones and Next will work as a bench mark for future Ground Espresso Bars stores, where consumers can avail of new features including bench top charging points, additional seating and community tables, as well as a new improved kids’ ‘playground’ in the Next store. 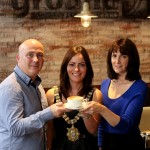 Lord Mayor of Belfast Councillor Nichola Mallon joins husband and wife team Darren and Karen Gardiner of Ground Espresso Bars, to toast their successful £100,000 investment in two Belfast stores and the announcement that they will be creating in excess over 100 jobs by opening numerous sites, as part of a multi-million pound investment with Next plc, including two new stores in Northern Ireland and their first unit in Dublin. 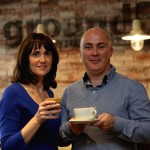 Karen and Darren Gardiner of Ground Espresso Bars, toast their successful £100,000 investment in two Belfast stores and announce that they will be creating in excess over 100 jobs by opening numerous sites, as part of a multi-million pound investment with Next plc, including two new stores in Northern Ireland and their first unit in Dublin.