The first New Season Comber Earlies were in the shops around county Down at the weekend, according to Richard Orr of the family-owned and managed William Orr and Sons, Crossgar.

Orr was among the first growers in Down of earlies to start supplying grocery stores and wholesalers John Henderson, which also runs the Spar retail business. “This year’s quality is very good. It’s been a tight growing season, the potatoes were first planted on St Patrick’s Day and were just harvested last week. Shoppers will enjoy them because the flavour is excellent and they look good,” he says.

The company harvests the potatoes, which have EU Protected Geographic Indicator (PGI) status, one of just three food products to have this designation, from 30 acres around the region including from fields fronting the picturesque Strangford Lough. 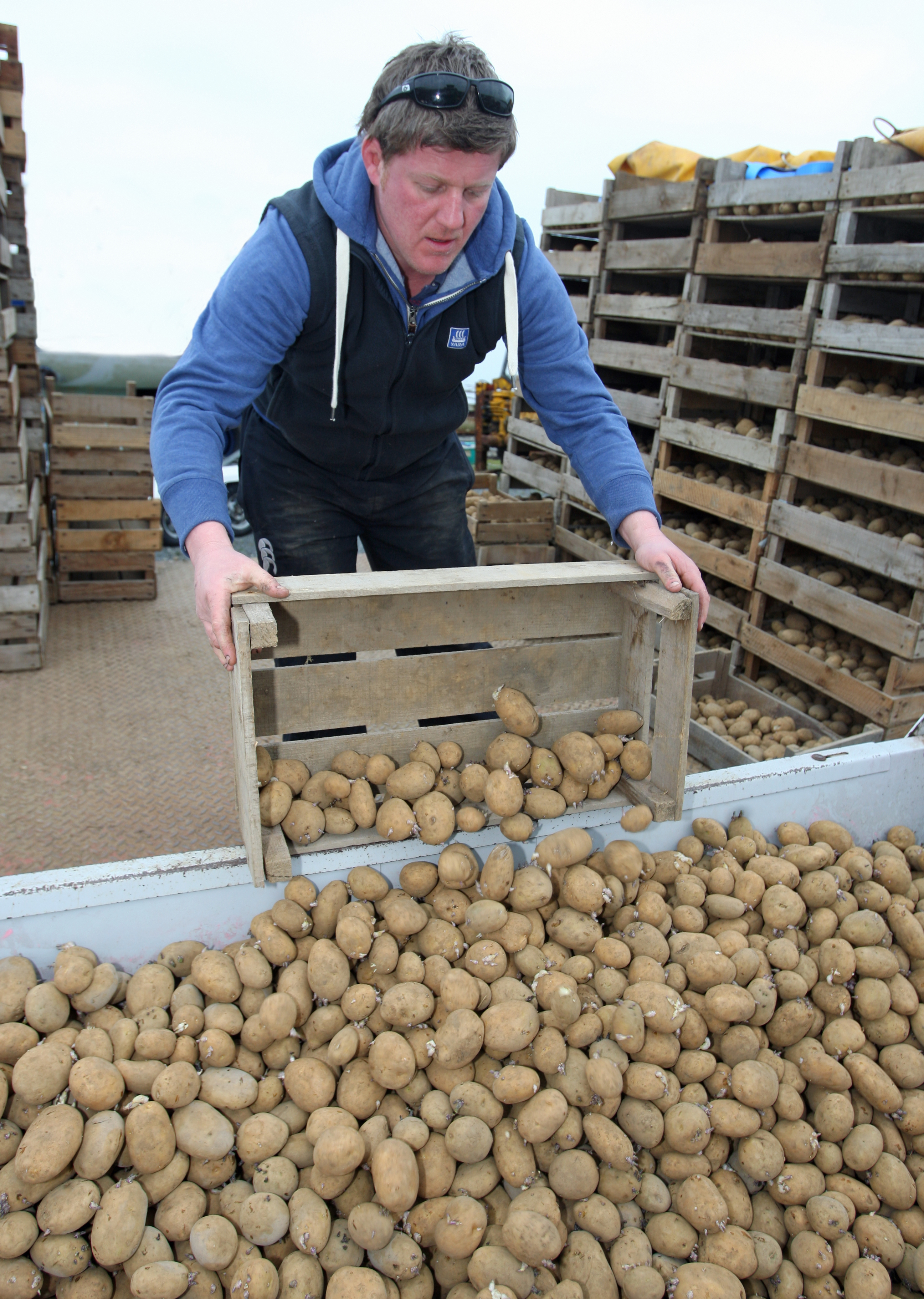 with a special three-day festival in the town at the end of the month.

William Orr and Son is a third-generation family run farm business which has specialised in growing and marketing quality potatoes for over 60 years.

Comber Earlies are the first potato harvest of the year. The potatoes are grown on the shores of Strangford Lough, where the milder climate and fertile soil provide ideal early conditions. Earlies tend to be richly flavoured, and are famous for
their unique taste. But growing earlies is an expensive business because of the tight timetable which usually requires covering the crop with plastic.

The family business grows a broad range of potatoes, including earlies and the equally popular Maris Piper. in country Down’s drumlin country, renowned for its rich soil and natural drainage.

Comber New Season potatoes are available from the beginning of June to the end of July and are the first available in Northern Ireland.

The first earlies are usually harvested in small quantities and eaten straight away when fresh boiled and with a dollop of creamy butter in June and July.

Second earlies and salad varieties can also be harvested in small quantities and eaten when fresh in June and July. Alternatively, if the skins are allowed to ‘set’ – they don’t rub off when lifted – they can be lifted in September and stored in a cool, dark, frost-free area as main crop varieties.

William Orr and Son has invested in a range packaging plant. Before packing the potatoes are washed, dried then inspected for quality and size. The potatoes move into the packaging plant where they are weighed to the required amount, pillow packed into branded bags then delivered to retail stores around Northern Ireland.

The granting of PGI status under European law means that only new season potatoes harvested from fields around Comber in County Down can now be marketed as ‘New Season Comber Potatoes’ or ‘Comber Earlies’.

The award to Comber potatoes followed an extensive lobbying campaign spearheaded by the Northern Ireland Potato Stakeholder Forum to achieve European recognition of the unique growing conditions around Comber, a generally warmer and sandier soil and the longest growing season of more than 270 days.

The industry has also been involved in a series of marketing initiatives such as the recent ‘Mighty Spud’ competition to grow sales especially among younger consumers.

There are currently fewer than 20 Comber potato growers in Northern Ireland supplying the retail and foodservice sectors.

Comber Earlies have been grown since the early 17th century in Northern Ireland in an area dominated by Strangford Lough, the largest inlet in the British Isles, and a designated area of special scientific interest.