It was during his first job working at an intensive pig farm, that eco-chef and food waste campaigner Tom Hunt became a vegetarian and, he’ll be offering plenty of food for thought when he makes a special guest appearance at the Slow Food Festival taking place in Derry next weekend.

Author of ‘The Natural Cook: Eating The Seasons from Root to Fruit’, Hunt will bring his mantra about using every last piece of every ingredient, centre stage at Northern Ireland’s only Slow Food Festival taking place in Guildhall Square, Derry on October 7th and 8th from 12 noon until 6pm.

Organised by Derry City and Strabane District Council as part of Slow Food Week, it will be a first trip to the North West for the pioneering young restaurateur who worked with Hugh Fearnley-Whittingstall as sous chef, course leader and food stylist on the River Cottage TV series.

Speaking ahead of his guest appearance at the Slow Food Festival, which attracted 25,000 visitors to the banks of the Foyle on its inaugural two-day run during Northern Ireland Year of Food and Drink 2016, Hunt is passionate that people are conscious of not over-buying on the weekly grocery shop. 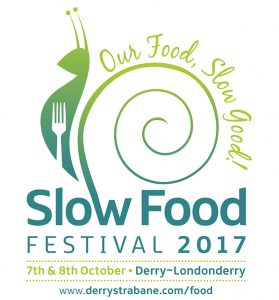 His ‘100% seasonal’ tapas restaurant ‘Poco’in Bristol – which won the Best Ethical Restaurant award in 2013 – is all about eliminating waste, celebrating the seasons and eating well, the seeds of which were planted duringhis childhood growing up in Dorset.

“I started out eating around the table at home and cooking a lot with my family. Then I got a job at an intensive pig farm where I became vegetarian for the first time,” recalled Hunt, who enjoys working his culinary magic onwonky vegetables, blemished fruit, and surplus meat andfish thatmight otherwisebe destined for the bin.

While Hunt embarked on a Fine Art degree at Falmouth University in Cornwall, his “serious passion for cooking” saw him mentored by close friend and professional chef, Ben Hodges.

“We travelled around British music festivals and catering for weddings where we basically cooked everything from scratch using organic produce. By the time I had finished my art degree, although I loved art and painting, I was ready to put down my paintbrushes and pick up my knives to follow a career in cooking.

“I have always cooked consciously but the big turning point was when I was invited to cook for 200 people on Suffolk Bridge in London by Tristram Stuart, author of ‘Waste: Uncovering the Global Food Scandal & The Bloodless Revolution’, and his team. We were inundated withincredible organic produce that would otherwise have gone to waste.”

Hunt went on to set up the Forgotten Feast, a campaign promoting sustainable food through dining and celebration – working closely with charitable organisations Slow Food, FareShare and Action Against Hunger whilst highlighting important concerns in the food industry.

He believes that saving money by using the whole ingredient, whether it’s cheap cuts of meat or the greens from a root vegetable, creates a budget for buying higher-welfare, better-quality ingredients that, in turn, provide better nutrition and support local communities.

Visitors to the Slow Food Festival in Derry can look forward to eco-friendly tips on how to get more from your food, improve nutrition and flavour, save money and support better farming.  The ethos of Slow Food is good, clean and fair food for everyone which is not mass produced. The global grassroots movement founded in Italy with supporters in around 150 countries, links the pleasure of food with a commitment to local communities and the environment.

Hunt’s veg-led cookery demonstrations taking place on both October 7th and 8th,  feature a selection of recipes inspired byhis ‘Root to Fruit’ eating philosophy; eat for pleasure, eat whole foods and eat the best you can.

According to Hunt, although he only eats organic food, he is spending less than he ever did before because he operates a zero waste policy– recycling or composting everything. An ambassador for the Soil Association and Fair Trade Foundation, he is a regular contributor to the Guardian and Observer food columns as well as other leading food publications such as Olive magazine.

He continued: “People tend to over-buy and don’t realise how much food is actually being thrown away.  I don’t see my work as a crusade as such but creating a sustainable future is one of the most vital and crucial questions for our time.People and corporations are wasting an obscene amount of food but, at the same time the message is getting through. People are realising around the world that we have to change and I am making steps to do that, although there is definitely a lot more to be done.”

The recipes that Tom will cook in the marquee in Guildhall Square include Beetroot leaf Borani: Iranian-style yoghurt and walnut dip (with misfit crudités); Carrot and fennel top pesto with carrot, fennel and orange salad; and Roast cauliflower leaves and florets with hazelnut sauce.

She added: “We are also delighted to welcome back Chef Brian McDermott as festival compere and a number of talented local chefs from restaurants in Derry and Strabane for the live cookery demos. This year’s festival will also feature a Harvest Market with 20 local artisan producers in the marquee, a Craft Beer Garden, street food and free children’s activities including a petting farm and smoothie bike machine all located in Guildhall Square.”

The two-day event is being funded by Tourism NI and the Department of Agriculture, Environment and Rural Affairs (DAERA) NI Regional Food Programme, supported by Slow Food NI and sponsored by Supervalu.

Louise Millsopp, Head of Agri-Food Support Branch, DAERA, said: ‘We are pleased to be providing support to the Slow Food Festival through the Northern Ireland Regional Food Programme. Now in its second year, the festival provides a great platform for artisan food and drink producers to showcase their high quality, award-wining, local produce.”

For further information on the Slow Food Festival including details of exhibitors, cookery demos, and other family-friendly activities centred in Guildhall Square from 12 noon until 6pm on October 7th and 8th, visit www.derrystrabane.com/food