Head Chef Alex Greene from Taste of Ulster member Deane’s Eipic in Belfast wowed diners at the Great British Menu Banquet with a double win in the Starter and Dessert categories.  The theme of this year’s competition was children’s literature, to mark 150 years since the death of Charles Dickens, with judges Matthew Fort, Oliver Peyton and Andi Oliver.

The Michelin-starred chef made it through the heats along with fellow chefs Tom Barnes and Niall Keating to cook for guests from the world of children’s literature at Exeter College, Oxford. The programme was aired on BBC TV last Friday night 15th May, 2020.

His starter, ‘the potato, the onion, the cheese and the wardrobe’ was inspired by Belfast author, CS Lewis. His potato-based dish consisted of onion jelly, pickled onions, five different types of potato, a four-cheese custard, and truffle, served in a wardrobe, and was inspired by Belfast-born C S Lewis’ The Lion, The Witch and The Wardrobe. It was described by the judges as “a sophisticated, sexy, sensual masterpiece”.

Alex took his inspiration for his dessert from the Belfast author Oliver Jeffers and his book The Incredible Book Eating Boy. It consisted of an edible ‘book’ made of coconut parfait, yuzu gel, coffee jelly, chocolate ganache and printed rice paper and coconut tuile ‘pages’. The judges said it was “the perfect ending to the banquet”.

Alex said it has “been a dream of mine to get to the Great British Menu Banquet  for as long as I can remember and to get there with two courses is just madness, I love it. Thank you to everyone who has helped me get here. What a journey!

“It is such an achievement to cook at the Great British Menu Banquet, one course is impressive but two is exceptional” said Taste of Ulster CEO, Michele Shirlow.

“Alex’s dishes made such a huge impression on the judges and the guests at the banquet were equally delighted with his food. Like a true professional, he got every plate out perfect despite a hitch when some of the pages on the dessert book started to come unstuck. He has made Northern Ireland proud and given us a great boost at a time when we needed it most. Congratulations!” 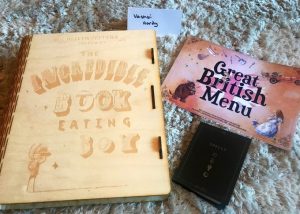