BBC Good Food Show, set to one be of the highlights of October in Year of Food and Drink, is aiming to celebrate Northern Ireland’s tremendous heritage in bread and baking by holding a competition for the region’s best bakery.
BBC Good Food is probably the biggest and most successful series of consumer food and drink shows in the United Kingdom and Ireland. And bringing such an important show to the Waterfront Hall in Belfast was quite a coup for TourismNI and Invest Northern Ireland; because it’s proved to be an event in Britain at which companies generally do good business.

We’ve been delighted to have the opportunity to help ensure the success of the overall event. We’ll have a Food Village featuring dozens of local food and drink producers. Our focus will be on supporting the companies as they seek to achieve significant sales.

I am sure there won’t be any shortage of entries from the many bakeries across Northern Ireland especially the smaller business which make such a tremendous contribution and great service to communities here.
Home bakeries in particular remain an integral part of the local food industry. In many parts of England they have virtually disappeared. Local favourites such as soda farls, potato cakes, treacle bread and wheaten loaves are enjoyed by visitors to these shores and have been essential part of our culinary identity for generations.
It’s immensely encouraging that the focus by some of our bakeries on sales outside Northern Ireland has meant that many of our traditional breads are now available in parts of Great Britain. An Ulster Fry, for instance, just wouldn’t be the same without soda bread and potato farls. Some include pancakes, another local favourite that’s perhaps a bit controversial with traditionalists! 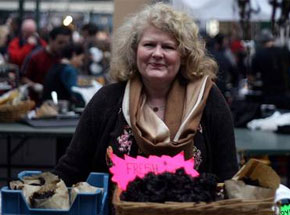 Several local companies, including smaller enterprises, have reached out successfully to quality bread lovers in Britain, the Republic of Ireland and further afield including the US and the United Arab Emirates. Our wide range of soda breads has also won acclaim from discerning judges in the UK Great Taste Awards such as Charles Campion, the doyen of food writers and a tremendous friend of the Northern Ireland food industry. He has written enthusiastically about the quality, taste and variety of our bread in food magazines.
In addition to the traditional Northern Irish breads, several bakers here are now mastering sourdough and popular Italian ciabatta and focaccia products.

The winning bakery in the competition will receive a free stand at the BBC Good Food Show at Belfast Waterfront, which runs from 14–16 October, to showcase their products and they will also have the opportunity to meet local celebrity chef Paul Rankin. Paul, as many Farm Week readers will be well aware, works closely with Irwin’s in Portadown, Northern Ireland’s best known and most successful independent bakery…..and a longstanding Food NI member…on product development.

Paul, a valued supporter of Food NI culinary initiatives, has assisted the bakery in creating a wide range of products including traditional breads such wheaten and the Belfast Barmbrack.
What bakeries have to do to be considered is to record a short video, maximum two minutes long, capturing “a day in the life of the bakery” and highlighting the stages of a typical baking day. It should then be uploaded to social media, using @BBCGoodFoodShow, @NITouristBoard and the hashtag #GFSNIBakery.
It’s a great idea. Over to our ambitious bakeries. Let’s make it a success.