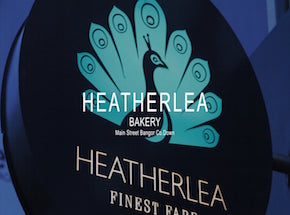 You might know about the Heatherlea Bakery and Café if you frequent the seaside town of Bangor in County Down. Locals there can’t get enough of what Paul and Patricia Getty’s team take out of the ovens.

They knew it wasn’t fair to limit their bodacious bread and terrific traybakes to Bangor, so they started supplying to independent retailers. That was back in 1991. Now their customer base is as passionate about the Heatherlea products as Paul and Patricia themselves.

They never rest on their laurels. They’ve expanded their wholesale range to include breads, cakes, biscuits and traybakes. We’re talking Spelt Wheaten and Low GI Loaf But let’s not forget their range of Great Taste Award winning stuff. So if you want freshly baked yummies delivered to your business, give them a call and try the Heatherlea Experience for yourself.