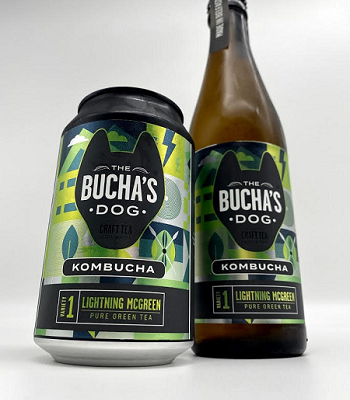 Demand for his fermented drinks has led Peter Barrett from the Craft Tea Brew Company near Belfast to invest in a new plant and canning facility. Products include The Buchas Dog kombucha and Craft Tea Cat sparkling tea.

The clue is in the very clever name. The Bucha in the Buchas Dog is Kombucha and it is the first one made in Northern Ireland. This range of Premium Kombuchas are hand-brewed in Belfast. Again, owner Peter Barrett has been clever with the names.

The Assamson and Goliath is made with black Assam Tea whereas the Lightning McGreen is made with green tea. The Haymaker has Apple, Lemon and Ginger and the Hoptimist has Grapefruit, Peach and Hops.  They retail for around £3 a bottle. Great for non-alcoholic alternatives and for good health.