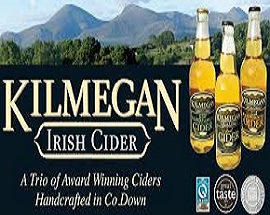 Founded in 2013 Kilmegan Cider is already internationally recognised as one of Northern Ireland’s premium craft ciders.

Irish Quality Food Awards and Great Taste Awards in 2015 were followed by further success in 2016 by becoming the first cider to win an International Cider Challenge. This achievement was eclipsed a few weeks later by the results in the British Cider Championships held at the Royal Bath and West Show in Somerset, England. With more than 600 ciders entered in what is recognised to be the biggest cider competition in the world, Kilmegan Cider won the Dry category and went on to be crowned Reserve Supreme British Cider Champion for 2016.

Each autumn, carefully selected varieties of apples from counties Down, Armagh and Tipperary are pressed using an old traditional Rack and Cloth press at the cidery outside the seaside village of Dundrum in County Down. The juice from these apples is fermented and then matured for up to twelve months before bottling. Using 100 per cent juice in the fermentation and sweetening process gives a natural, clean, crisp finish to all their ciders.

Other than small quantities of sulphites used at the initial juice stage, no other chemicals are used in the production method. Suitable for vegans, all the ciders are gluten-free. It’s not filtered or pasteurised and is naturally carbonated through bottle conditioning. They are stocked in off licences and good restaurants, bars and hotels across Northern Ireland.